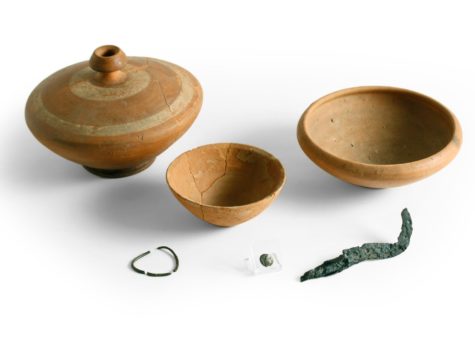 The new separate section of the Verbania Museo del Paesaggio, at Residenza Municipale di Ornavasso, hosts the museum’s archeology collection named after Enrico Bianchetti, the Ornavasso archaeologist who first brought to light the ultra precious necropolises in which Ornavasso’s inhabitants were buried for three centuries, from around 200 years prior to Roman conquest under Emperor Augustus to around one hundred years after it became part of the Empire, that is the 2nd century BC to the first century AD.

The Ornavasso archaeology area is made up of two small burial sites a little south of Punta di Migiandone which closes off the Valle del Toce, one to the right and the other to the left of the road which climbs up from Lake Maggiore in the direction of Domodossola and the Alpine passes.

The first is the San Bernardo necropolis named after the oratorio of the same name in the centre of the area and made up of 182 tombs of which 165 were excavated by Bianchetti in the late 19th century with the rest being unearthed during excavations managed by Soprintendenza archeologica del Piemonte in 1948 and 1950. The second is called In Persona and is around 200 metres away comprising 165 tombs all excavated under Enrico Bianchetti.

At present the section comprises four rooms. The first synthetically illustrates the characteristics of the people buried in the necropolis. The second contains a video which tells the story of the area and the excavations. The third and fourth display the tomb accoutrements.

The scientific research is the work of Paola Piana Agostinetti (born in Ornavasso, archaeology professor at Rome University, great expert in the two necropolises excavated by Bianchetti and curator of the Museo del Paesaggio’s archaeology section) and the layout was designed in close conjunction with Soprintendenza officials Francesca Garanzini and Elisa Lanza.

Visits can be accompanied by audio guides which can be activated on any smartphone or tablet using the codes on each glass case. The audio guide texts were written by Benedetta Piola Caselli and recorded by volunteers with the determinant contribution of Associazione Libro Parlato Lions Verbania, presenting oral testimony from the individuals buried in the necropolises and whose tomb accoutrements are displayed in the cases. We thus hear the stories of Ornavasso’s First Mayor, the Girl with the Amulet, the Little Valley Girl, the Philosopher Shepherdess, etc.

In its current form, the exhibition does not encompass the whole of the Bianchetti collection nor the other accoutrements which make up the Museo del Paesaggio archaeology section which includes a great many finds from Central Italy and others excavated in other areas of Verbano.  Prioritising one part of the Bianchetti collection was a joint decision by Ornavasso town council and the Museo del Paesaggio board of directors whilst reiterating their commitment to finding the resources required to supplement the exhibition in such a way that it represents the collection’s great wealth of material in a more thoroughgoing way in the medium term.

In this sense, Ornavasso’s mayor Filippo Cigala Fulgosi stated: ‘The museum will be supplemented by two rooms which will subsequently be added. Then the exhibition will expand into the adjacent building purchased for this purpose by the town council. The available funds did not enable us to do more because, apart from a much valued contribution of 8000 Euros by Fondazione Comunitaria for the display, the expenses required for the organisation (total cost 150,000 Euros including the purchase of the building) were entirely borne by the town council. As far as museum opening is concerned, it will always be open to schools on request but initially the idea is to be able to guarantee at least a few days per week with the help of volunteers.

For his part the president of the Museo del Paesaggio Massimo Terzi stated: ‘We are very happy with this result. In addition to the three Verbania buildings, the Museo del Paesagio has recently supplemented the Museo di Cannero’s ethnographic collection with fifty or so objects and is now finally creating the separate Ornavasso section focusing on great archaeologist Bianchetti. It is a further important step forward in the rebirth of the Museo del Paesaggio whose aim is to become a museum for the whole area, in accordance with the original founding values. We are working to ensure that this objective is shared by other town councils in order to enable us to make the museum’s patrimony available to the wider community. Heartfelt thanks go to Ornavasso town council, Fondazione Comunitaria, Professor Piana Agostinetti and all those who have worked with extraordinary enthusiasm and energy to move this initiative forward’.

Maximum group numbers for visits will be 15. Booking required on:


Subscribe the newsletter to be always adviced about the activities of the Museum.